What’s happening when a man gets bored?

Last night I had to work some extra hours and to add to this I had to participate in a 1 hour online chat for which I had promised to take part in, so I was kind of busy all evening.

Mark wasn’t sure how to entertain himself so due to boredom he wondered into our kitchen and decided to create some snacks for us.

Look what I discovered once I finally left my office.

Midnight snack to suit all type of munchies

Isn’t this great (…well for me it is anyways)!

Tons of fantastic homemade goodies to munch on.

We had some cheese straws,
which were light and fluffy unfortunately they were all eaten last night

Individual apple and cinnamon tarts
with homemade custard nestled in a mountain range of light fluffy homemade puff pastry,
half of whom did survive till the morning were they were promptly eaten with coffee for breakfast 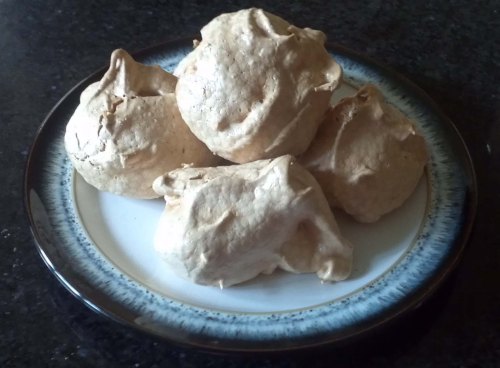 A selection of delicious meringues that have a wonderful toasted look to them.
Mark says it is from the soft brown sugars caramelising in the oven. They should last us for a while.

Marks Make It Up As You Go Along Trifle

He took some yoghurt cake he made a couple of days ago, put it in the bottom of the big bowl and poured some lemon and lime jelly over. That was last night, this morning the jelly was set and he added the rest of the home made custard left over from the apple tarts. On top of that is a chocolate mousse, I’m actually drooling with anticipation! Now he tells me that whipped cream, chocolate bits, fudge bits and of course some fruit to keep the healthy part of our brains happy are going on top.

9 responses to “What’s happening when a man gets bored?”