Last month I took part in #sketchtostore style challenge with Come Round and French Connection. Our party took place at the Cambridge store.

My guests and I (plus everyone else who took part in the party for that matter) received a 20% discount on the day plus a goodie bag which included:

It was the first time that Come Round had organized an in-store party. The idea was great but execution could maybe be better. The point of the party was to try on the new collection and thus try to re-style yourself, which was totally fantastic and tons of fun, but it is impossible to try something on if the stock is missing… and unfortunately in the Cambridge store there were a lot of sizes out of stock.

I was the most unlucky one, size wise, all the trousers which I would love to try on and potentially buy were only going up to size 12 (I need a 14, which were all sold out 😦) so no shopping for me on the day… To make up for this situation we were given a 20% discount (to match up the discount on the day of the party) to be used at a later date, which I thought was a really nice touch from French Connection… thank you so much for that… But not everyone was as unlucky as me… some of my guests shopped till they almost dropped 🙂 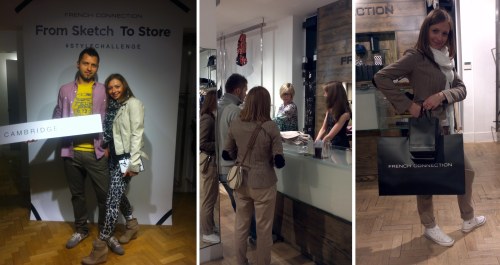 The store staff were very nice and extremely helpful. We were greeted with a selection of drinks and snacks, which were available throughout the evening.

Despite the fact that I personally wasn’t able to buy anything I really enjoyed this event. It was a fun few hours spent with friends and surrounded by great clothes, even more fantastic shoes and accessories to die for.

Let’s hope this wasn’t just a one off and there will be more in-store parties in the future.

But this isn’t all. Now, we have been given the chance of winning £1250 for the best group picture, so I need your help.

So if you can, please like our picture on Facebook… and if on 13-10-2013 our picture will have the most likes from all the Cambridge shots, we will be put forward into the final voting stage to win the main prize…

*crosses all fingers, toes and eyes* 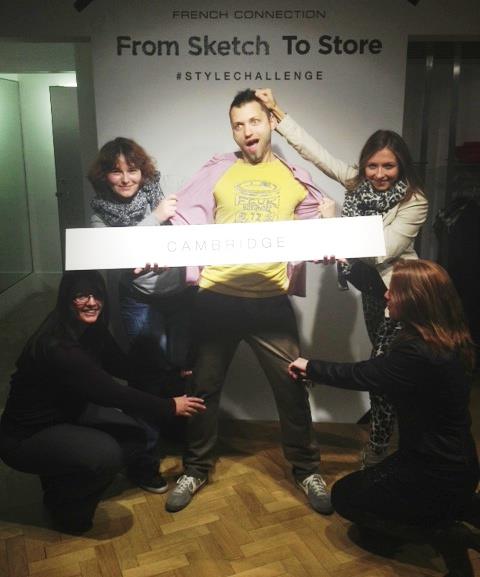 37 responses to “#sketchtostore #stylechallenge with Come Round and French Connection”